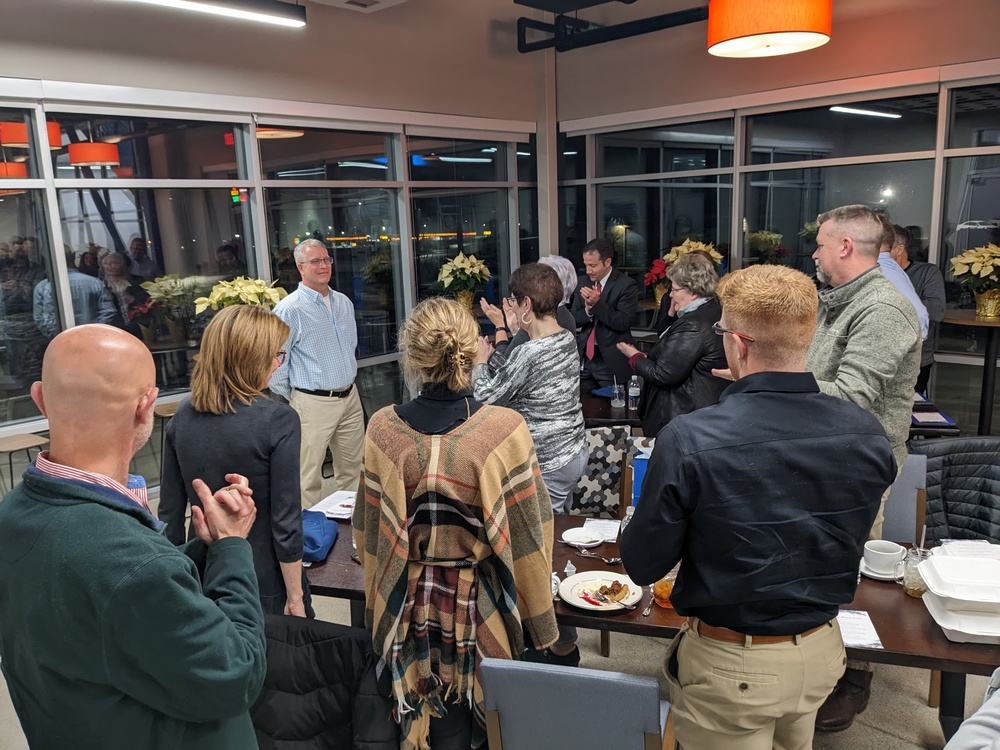 Ohio Hi-Point Career Center’s Board of Education recognized the work of Eric Adelsberger, Treasurer of Ohio Hi-Point, during a regularly scheduled board meeting Wednesday evening. Mr. Adelsberger is retiring at the end of December 2022 after serving the district for almost 26 years.

Mr. Adelsberger was hired by the Board of Education in May 1997 and is Ohio Hi-Point’s longest serving Treasurer. Before coming to Ohio Hi-Point, Mr. Adelsberger served three years as treasurer at Fairbanks Local School District and prior to that he served in the State Auditor’s Office for about a year and a half.

“Mr. Adelsberger has made a tremendous impact on the success of this school district,” said Anne Reames, President of the Ohio Hi-Point Board of Education. “When he and Kim Wilson established our satellite programs, the financial investment allowed us to deliver career education directly to students and build strong relationships with the school districts we serve.”

Today, Ohio Hi-Point has over 50 satellite programs in addition to the 16 programs on the Bellefontaine Campus, serving more than 4,000 students at 12 locations.

“I always appreciated the opportunity to be more than just someone who entered numbers into a system,” said Mr. Adelsberger, “What I’ve loved about this job was that I had an opportunity to be creative and use my brain and experience to come up with out-of-the-box solutions. The development of the satellite programs was one of those solutions.”

Under Mr. Adelsberger’s leadership, the district has never received less than an unqualified audit opinion and has received the Auditor of State Award for sound stewardship of tax dollars and compliance with laws and regulations six times since the award was established in 2010. In addition, the district has been recognized by the Ohio Senate for “exemplary financial reporting” three times.

“Mr. Adelsberger is well respected in his field,” said Reames. “He takes the trust of the taxpayers very seriously and has a great way of balancing between what the needs of the district are and what is financially responsible.”

In 2018, voters approved a 0.6-mill permanent improvement levy, Ohio Hi-Point’s first levy on the ballot in 40 years, for the district’s building renovation and construction project, which was completed in September 2022. Reames said, “Mr. Adelsberger continued to stretch his financial knowledge after the levy passed, and he connected with different financial institutions to gain additional information about investment strategies and resources.”

His budget forecasts helped Ohio Hi-Point’s Board of Education plan for financial issues without surprises. “I worked with him for 20 years and highly respect him as a treasurer,” said Reames. “His financial planning helped steer our organization in the right direction and gave us the ability to tackle building projects, retirements, program operations, financial procedures, and more with clarity and confidence.”

Mr. Adelsberger will retire December 30 and will be succeeded by Assistant Treasurer Caleb Lang, who was brought in last year as part of the transition process.